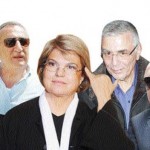 Nineteen persons, among whom are former police chiefs and members of the special team, were tried by the Ankara 1st Assize Court for having killed nineteen persons extra-judicially and arbitrarily in Ankara and its vicinity during 1993-1996.

There were no detained defendants in the first hearing held on 16 May 2014. During the hearing held on 10 April 2015, the former Head of the Security Department of the National Intelligence Service, Mehmet Eymür presented the court with a list of twenty nine persons to be executed that had been given to him. In the 3 July 2015 hearing, then head of Prime Ministry Inspection Board, who had prepared the report on the Susurluk incident, Kutlu Savaş, and on the hearing held on 20 November 2015, former Police Chief and Governor of Ordu, Kemal Yazıcıoğlu testified as witnesses.

26 February 2016 hearing of the trial was attended solely by defendant Ayhan Çarkın, who was being tried for the crime of “killing by forming an armed entity to commit crimes” according to Article 450/4-5 of the former Turkish Penal Code. In the earlier hearing those who had been called as witnesses, namely former Chief of Police Hanefi Avcı, politician and writer Fikri Sağlar, Vice President to the Nation Party Hikmet Çiçek, and Republican People Party MP from İzmir, Tuncay Özkan gave their testimony.

In the hearing held on 17 June 2016, former Minister of the Interior Nahit Menteşe, the Homicide Bureau officer at the time Lütfullah Uzun, who recorded the official report concerning the murder of Ömer Lütfi Topal, İstanbul Police Headquarters Pickpocketing Bureau Chief Şükrü Pekgil, who played a role in the detention of Special Operations police officers, Oğuz Yorulmaz and Ayhan Çarkın, businessman on the “Death List”, but whose name was removed after his talk with Mehmet Ağar, Vekin Aktan were heard as witnesses. Veli Küçük did not give his testimony since he was not found in the address he had declared to the court and to whom the notification could not be sent. Of the defendants, Mahmut Yıldırım (known as Yeşil), the written record of whose testimony taken labeled “secret” and taken earlier by the former Counter-Terrorism Unit Chief Mehmet Eymür was also read. It was decided that Akın Kızıloğlu and Şentürk Demirel, who had detained, Special Operations police officers Oğuz Yorulmaz, and Ayhan Çarkın be heard as witnesses before the court, while İsmet Berkan, Mesut Yılmaz, and Tanıl Tekin will be called to give their testimony and their statements will be taken through the intermediary of SEGBIS system.

During the hearing held on 11 November 2016, Uğur Dündar and Yaman Namlı gave their testimonies as witnesses via the audio-visual communication system. In its interim decisions, the court decided that since former Prime Minister Mesut Yılmaz, journalist Emin Demirel, Mümtazer Türköne, Fikri Sağlar, and Orhan Taşanlar, who would have been heard as witnesses through the testimony of their representation in court, the journalist İsmet Berkan, went back on their decision to do so, it was no longer necessary to hear them in court. In addition, the court decided that “what has been referred to as the ‘the 2nd Report of the National Intelligence Organisation,’ which was already published in the Aydınlık newspaper, be brought to court from the Istanbul Police Headquarters”, while the Susurluk Report would be retrieved from the TV Channel D. Furthermore, the court also determined that it was essential to learn the addresses of Akın Kızıloğlu, Şentürk Demiral, and Veli Küçük to get the documents concerning the investigation into the killing Mehmet Kaygısız in the UK as was mentioned in the statements of Mehmet Eymür. The court also decided that it was no longer necessary to exempt the defendants from coming to the hearings and that the request to arrest them be refused.

During the hearing held on 10 February 2017, former Ankara Police Chief Orhan Taşanlar, Homicide Department Bureau Chief at the time, Şentürk Demiral, former Usurpation Bureau Chief Akın Kızıloğlu, and former Prime Minister Tansu Çiller’s advisory at the time, Mümtazer Türköne, in addition to Doğan Özkan were heard as witnesses. The Court decided to call Fikri Sağlar again with a witness certificate, and to get Veli Küçük, Fevzi Türkeri, Emin Demirel, Ahmet Duran Alp, and Mesut Yılmaz ready to be heard as witnesses via the audio-visual, SEGBIS system. In addition, the demand to hear secret witnesses code-named “Emek” and “Ayışığı”, the court decided, would be evaluated later depending on the number of witnesses to be heard.

During the hearing held on 5 May 2017, Fevzi Türkeri and Nur İnuğur were heard as witnesses. Due to the inability to establish a connection via the audio-visual system, defendant Alper Tekdemir and Emin Demirel, who was expected to be present as witness, could not be heard in court. Veli Küçük, had a leave of absence report, while Mesut Yılmaz and Fikri Sağlar were not present in court, and hence none of them could bear testimony. Tansu Çiller and her husband Özer Uçuran Çiller, responding to the witness request via their lawyer, claimed this was a “fool’s errand” and, in their petition said they could just as well send a written response to the attendant lawyer’s written questions. However, the prosecutor’s opinion was that they should be present in court. The court board, in turn, decided that a statement be written and sent to the Istanbul Assize Court to hear them via SEGBIS, the audio-visual system.

After pleading, Tansu Çiller and Özer Uçuran Çiller did not attend the last hearing held on 15 September 2017. Veli Küçük and Emin Demirel gave their testimony via the audio-visual system. It was decided to send an SMS (message via the cell phone) to Fikri Sağlar asking him to give his testimony in court; to write instructions to Ahmet Mesut Yılmaz so he could be heard via the audio-visual system, and despite earlier decisions to the contrary, that it was not necessary to hear Tansu Çiller and Özer Uçuran Çiller at this stage.

In the final hearing held on 13 December 2019, the court ruled that the charges against Ahmet Demirel be dropped as he died, the continuation of criminal proceedings for the killings of Lazem Esmaeili and Asker Smitko as it has not been possible to arrest defendant Mahmut Yıldırım, and the acquittal of all other defendants for the killings of other deceased in the trial.

Case of Selim Yıldırım and Others v. Turkey