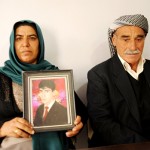 The indictment concerning the enforced disappearance of eight persons, including one specialist sergeant and three children in the Dargeçit district of the Mardin province between 29 October 1995, and 8 March 1996, was concluded on 30 October 2014.

Upon the objection to the decision by the Mardin branch of the Human Rights Organization, Midyat Criminal Court of Peace partly accepted the objection, and although it refused the application concerning Hikmet Kaya on the grounds of insufficient evidence, it accepted that the decision not to prosecute the other suspects be overturned and that an additional indictment be prepared.

The trial was transferred to Adıyaman on the grounds of security, even before it began. Following the first hearing held on 1 October 2015, the Adıyaman 1st Assize Court asked that permission be obtained from the Supreme Board of Judges and Prosecutors for the trial of defendant Mehmet Tire.

Families of victims and lawyers living in Dargeçit could not attend the second hearing held on 29 December 2015 due to the curfew imposed in the region. The lawyers of the victims’ families asked for the court that had asked for permission from the Supreme Board of Judges and Prosecutors to try Mehmet Tire to recuse themselves.

On the third hearing of 3 May 2016, the Forensic Medicine Agency report which stated that the bones found during the investigation definitely belonged to Davut Altınkaynak and Nedim Akyön was submitted to the court. Defendants Kerim Şahin and Fethullah Çelik defended themselves through the intermediary of the video conference system. The request of the legal representatives of victims made in regards to bringing the defendants to the court to testify was once again denied due to grounds of security.

During the hearing held on 3 October 2016, the court took testimony from the relatives of the victims. Abdurrahman Coşkun’s brother Abdulgafur Coşkun, Davut Altınkaynak’s brother’s wife Kania Altınkaynak, Nedim Akyön’s brother’s wife Zeliha Akyön, and Süleyman Seyhan’s wife Mümine Seyhan testified as witnesses to the events. The legal representatives of victims stated that the court had not followed its decision on taking Mehmet Tire’s testimony via video conference and asked that all defendants be detained during the legal proceedings, or at least be kept under surveillance and forbidden to exit the country. While the court refused to detain the defendants, surveillance measures were granted, which prevented the defendants from leaving the country for the duration of the trial. It was also decided that Mehmet Tire be forcibly brought to give his testimony via the audio-visual system.

During the 5 December 2016 hearing, in his testimony via the audio-visual communication system, Mehmet Tire claimed that he was not in Dargeçit at the time of the event, that his eye was hurt and hence he had to have an operation, followed by a leave of absence for two months for recuperation. Also heard as witnesses during the hearing were Davut Altınkaynak’s mother Hayat Altınkaynak and Emin Coşkun. While defendant Mehmet Tire’s demand to be exempt from the court proceedings was denied, the court put a ban on all defendants to exit the country until the end of the trial.

During the hearing held on 13 March 2017, more witnesses and relatives of the victims gave their statements. The prosecutor asked that the case at hand be joined with the Kızıltepe JITEM case, which was being tried at the Ankara 5th Assize Court. Legal representative of victims Erdal Kuzu objected to this motion, stating that it would be inefficient to join the two cases when the case at hand was at its final stages. The court, in its interim decision, accepted the request of the prosecutor to join the two trials; and that the case at hand would be tried under number 2014/367 before the Ankara 5th Assize Court. The 5th Criminal Chamber of the Court of Cassation overturned the decision to join the two trials on 19 October 2017 and sent the file back to the Adıyaman 1st Assize Court.

The trial recommenced on 27 April 2018. Legal representative to the victims Erdal Kuzu stated that they did not agree with the decision of the Court of Cassation to separate the cases, arguing that there was a legal and practical bond between the two cases and that their separation prevented JITEM’s activities from being fully understood. Kuzu also asked the court to amend the charges of the defendants to include the crime of being members of a criminal organization, and to retake their statements in regard to this change. Kuzu also asked that the court execute its decision to ask the Mardin Gendarmerie Command to confirm the location of the military shelter Mehmet Tire was documented to be in 1996 and the location the bones of the victims were found. The court decided that this request would be considered at the next hearing and issued a warrant on defendant Bahattin Ergel to be brought to court to testify.

On 11 July 2018, Lawyer Ramazan Güler, the legal representative of defendants Mahmut Yılmaz and Faruk Çatak, asked that the anonymous witnesses whose testimony was accepted as evidence to be listened to in court. Lawyer Nazmi Gökçe, representative of defendant Haydar Topçam, asked that the court refuse to listen to the anonymous witnesses and stated that the only reason the victims had opened a case was to seek monetary compensation.

On 22 October 2018, the Mardin Gendarmerie Command confirmed that the military shelter which sheltered a maimed Mehmet Tire was the same location where the bones of the victims were found. Defendant Haydar Topçam testified that he was deputy to the station commander at the time of the events, that he was not assigned juridical duties and that he had prepared the document, which showed that a maimed Mehmet Tire was in the military shelter at the time of the events. Defendant Faruk Çatak testified that he was not authorized to arrest anyone, but the station commander was. The court accepted lawyer Erdal Kuzu’s request to have Mahmut Yılmaz, Mehmet Tire, and Hurşit İmren testify again in light of the new allegations and that the anonymous witnesses be heard between hearings via video conference.

On 6 February 2019, witnesses including the former district governor of Dargeçit testified in court, stating that JITEM had illegally detained and killed the victims. The court decided for the exact distance between the shelter Mehmet Tire was at and the location where the bones of the victims are measured and reported back to the court.

On 13 May 2019, Hazni Doğan, who claimed to be an eyewitness, testified in court. He stated that he was tortured, his brother Seyhan Doğan was subjected to strappado, Abdurrahman Olcay was also there, and that he had heard Mehmet Emin Aslan’s voice. Abdülkerim Kaya and Osman Seyhan stated that they also wished to join the case as plaintiffs. Lawyer Erdal Kuzu reminded the court that the decision to hear former Dargeçit Governor Adem Kul had not been executed since its acceptance a year ago. The court accepted Hazni Doğan’s request to join the case as a victim, denied Lawyer Erdal Kuzu’s request to have the defendants detained, and that witness Adem Kul be prepared to testify via video conference by the next hearing.

On 30 September 2019, the public prosecutor asked that the Ankara 5th Assize Court be asked about the Kızıltepe JITEM case and that a formal notation of Abdurrahman Olcay’s death be made after the forensic medicine report on the circumstances of his death is analyzed. The court accepted both requests. The court once again rejected the requests to detain the defendants and that witnesses Adem Kul and Ahmet Çiçek be forcibly brought to court to testify.

On the hearing of 23 December 2019, none of the legal representatives for the defendants attended court, all citing Professional conflicts. Witnesses Adem Kul and Ahmet Çiçek were not present either. The court decided that Adem Kul, who had been sentenced to prison for being a FETO member, would be heard via video conference. The court reiterated its decision to have the other witnesses testify and rejected the requests to have Hatice Batırır testify again and to have the defendants be detained.