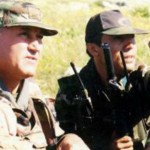 During a military operation carried out around the scattered hamlets (Gurnik, Mezire, Pireş, Kepir ve Şuşan) of Diyarbakır’s Kulp county, Alaca village and Kayalısu village (administratively connected to Licik hamlet of Muş), in between October the 8th through October the 25th, 1993 by the Bolu Brigade under the command of General Yavuz Ertürk, the 11 persons that were detained were never to be heard from again. On November 5, 2004, a mass grave was found where 11 individuals were buried. In the criminal charge brought against Bolu 2nd Commando Brigade Commander retired Brigadier General Yavuz Ertürk was charged with articles 313/2, 450/4-5 and 149 under the former Penal Code of Turkey with ‘’killing one or more persons for the same purpose, inciting the public to rebellion and killing one another and forming an entity with the purpose of commiting crimes’’ and motioned for court proceedings.

The criminal charge was accepted by the 7th High Penal Court in Diyarbakır but the case was transferred to Ankara on grounds of security.

An interesting and significant development concerning the case was based on the inability to find the whereabouts of the Bolu 2nd Commando Brigade Command at the time and the names of the soldiers involved. Diyarbakır Public Prosecutor had asked this of the Bolu 2nd Brigadier Command. In its response, the Commandership said that due to earthquake of 1999, the pipes had exploded and the place was flooded, and hence the records stemming from that date were unavailable. The Prosecutor then proceeded to ask the same question from the Bolu Provincial Disaster and Emergency Directorate, upon which the answer was: ‘’There are no documents or information concerning the damage impact of the earthquake which occurred on November 12, 1999 on the Bolu 2nd Commando Brigade Command’’.

On the December 8, 2015 hearing of the case held at the 7th High Criminal Court of Ankara, the court board decided that the unavailable personnel archives be requested from the Archives Directorate of the Land Forces Command in Ankara.

At the hearing held on March 7, 2016, against Bolu 2nd Commando retired Brigadier General Yavuz Ertürk and Hasan Kundakçı, Diyarbakır Gendarmerie Public Security Lieutenant General Commander at the time, were heard as witnesses. Since the intervening lawyers were unable to reach the list of commissioned military personnel at the official archives, the court panel decided to evaluate the proposal to find a list of soldiers who had gone on operations at the time via a newspaper ad.

At the 12th hearing held on June 20, 2016, the panel of judges decided that hearing the witnesses, i.e., the military personnel who had participated in the operation would not be of any use in judging the case; hence the request which had not yet reached the court and which had been made in the former hearing that the list of military personnel who had participated in the operation “be found through a newspaper ad” was denied. The demand that defendant Yavuz Ertürk be arrested was rejected, while the Gendarmerie Commander at the Kulp county at the time, Ali Ergülmez will be heard as witness and brought to court by force if necessary.

At the hearing held on October 31, 2016 Ali Ergülmez testified as witness via the audio-visual communication system. In their statement to the court the defendants’ attorneys, on the other hand, said that on October 27, 2016 they had petitioned the court for a decision of lack of jurisdiction, since, according to changes made in Law No. 6722, those deeds realized within the context of ‘the law to fight terrorism’, are subject to the permission of the Ministry of Defense for the due process of law to proceed. The prosecutor’s opinion which was also supported by the defense attorneys’ was that “According to Article 12 of Law 6722, which was published in the Official Gazette on July 14, 2016, since such actions are considered within the context of military offenses, and relate to public order, due process of law should be carried on within the context of military courts and that the present court should give the decision of non-jurisdiction.”. The plaintiff’s, attorneys, on the other hand, wanted to hand in their opinion in written form and requested a time period to do so.

During the hearing of the (Kulp) Yavuz Ertürk case held on January 16, 2017, of the solicitors who attended, Lawyer Erkan Şenses repeated his earlier demand for non-jurisdiction that he had presented, in-between the hearings. He said that to return the file back to the military court, represented a violation of the responsibility of effective investigation of the right to life. Drawing attention, in addition, to the possibility of the closing down of military courts, should the change of the Constitution in the Parliament take place, he demanded that the current situation be determined as a “prejudicial question”. Referring to the fact that the defendant had taken part in operations formerly by the command of the Turkish General Staff, Erkan Şenses defended that the operation could not be considered under Law no. 5442. The Court, in its interim decision, decided to ask the Turkish General Staff and the Ministry of Interior whether the operation could be considered under law no. 5442.

During the hearing of the case held on April 25, 2017, the Court decided to wait for the results of the referendum held on Apr. 16, 2017 to be published in the Official Gazette, since the referendum included the lifting of military justice from the justice arena in Turkey.

During the hearing held on June 12, 2017, the response from the General Staff was read which said “there was no information or documentation concerning the operation held in 1993”. Of the attendant lawyers’ Muhterem Süren responded by saying that this response aimed “to protect the defendant”. All requests by the lawyers’ attending the hearing aside from those of the witnesses, concerning the flight records of helicopters be obtained and the military personnel flying the helicopters be questioned were denied by the court.

During the hearing held on October 12, 2017, the defendant’s lawyer continued with his request that the other defendant be also remanded, while of the attendant lawyers’, Muhterem Süren provided the court with evidence from the documents he had obtained from the archives of the Diyarbakır branch of the Human Rights Association on a CD.

Case of Akdeniz and Other v. Turkey