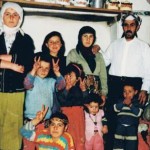 Nine persons, all members of the same family, were killed in the Vartinis (Altınova) hamlet of the Korkut county in the Muş province on 3 October 1993, when their house was set on fire following the allegations that they had “aided and abetted an illegal terrorist organization”.

Immediately following the incident, Aysel Öğüt, the only remaining member of the family, said that the house had been set on fire by soldiers and filed a criminal complaint; while the head of the Chief Public Prosecutors in Muş asserted that it was the PKK, who had burnt the house.

The trial was transferred to Kırıkkale on the grounds of security. During the hearing held on 10 June 2015, the prosecutor asked the court to sentence the defendants with 20 to 25 years imprisonment for each of the nine victims, meaning a total of 180-225 years of prison sentence for each defendant.

Before the final hearing on 1 March 2016, when the judgment of the court was expected, the only remaining member of the family, along with some friends and constituents of the Coalition Against Impunity held a press conference. In the final hearing held at the Kırıkkale Assize Court, the prosecutor, in a modification of his earlier opinions, asked for the acquittal of all defendants except Bülent Karaoğlu.  All of the defendants were acquitted.